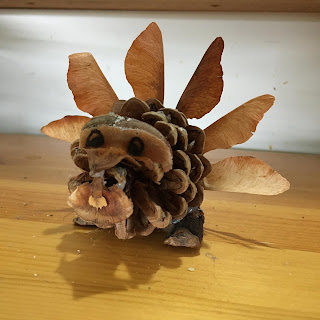 Make a flock of turkeys for your Thanksgiving table centre piece.  Aren't they cute? For each turkey you will need: one round pine cone two large pine cone scales 6 or 7 large maple keys or conifer catkins (for the tail) large spruce, fir or cedar scale (face with beak) Douglas or Grand fir scale (for the dewlap aka wottle) felt pen or 2 small googly eyes craft glue or glue gun How to: Place a round pine cone on it's side. Roll it a bit to find a position where it is most stable laying on its side without support.  If it doesn't, cboose another cone and try again. This is an important step or you end up with a turkey that falls over. Place the feet scales curved side down on the table and place them next to the cone, one on each side. Make sure they are placed towards the base of the cone. Glue in place.  Starting at the centre top, glue the maple keys on the base of the cone. Work your way out.  Draw eyes on or glue googly eyes the face scale. Position the face scale and g
Read more
More posts