Meal worms are an easy food to culture. Basically a start them and forget them for a while type of critter.  Small ones may be fed to fish and small reptiles, larger ones and pupae to medium-sized carnivorous fish, reptiles and amphibians. They can be a great live food treat for small rodents like mice and rats, pet birds and a scratch food for chickens too! 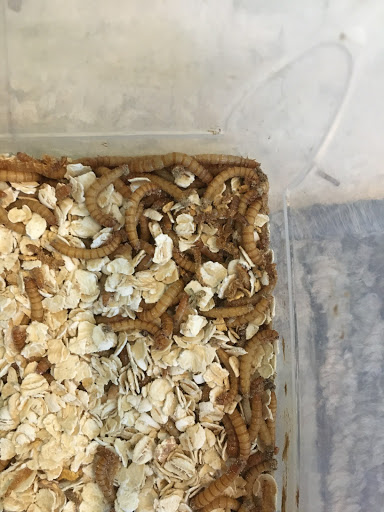 The fastest way to get more mealworms is to start with a mix of larvae (worms), larvae and adult beetles. The adults will start laying eggs immediately so you will have young sooner. The larvae will transform later and provide more eggs and finally, the larvae will metamorphosis last to provide an ongoing egg supply. The eggs, of course are hatching into tiny worms that eat continuously. Expect to start harvesting large-sized worms in about 3 months, smaller worms sooner. Starting with 50 worms, in 3 months you can grow about 200-300 (plus pupae and beetles) if you only harvest lightly.

Container
A plastic box with a lid or large coffee tin with a lid works great to house mealworms. I also put in a half a cardboard egg carton to give the worms and beetle a place to crawl around on as well as provide more floor space (surface area for crawling) as they grow.

Having several containers means you will have worms of varying sizes. A variety of container size and types can be used depending on the scale you want to raise them. 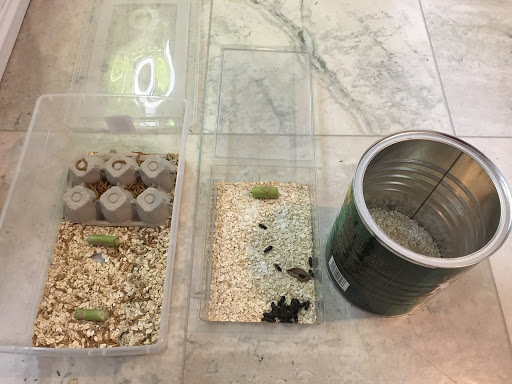 Food
Any size of flake of oatmeal flake from one minute to large works. You can add some old bran flake if you happen to have some. I also add calcium carbonate powder and debittered brewer's yeast to add nutritional value. They will eat a variety of foods which is why they are so successful and adaptable as feed. A closely-related beetle, the peanut beetle eats peanuts and has a much higher protein content than flour beetles. I have not yet experimented with feeding them peanuts but you can try it if you want a more nutritious food for your critters.

Here an old dry potato slice has a few beetles on it but a new small carrot I just put in is swarmed with beetles. 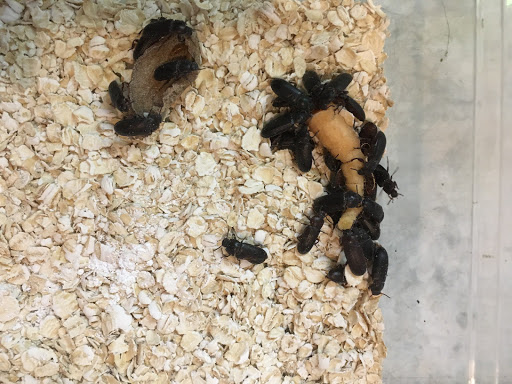 Water
In place of water, I have found that asparagus ends (the end you snap off and throw away) is an ideal source of moisture. Cut them lengthwise so the beetles can access them more easily. The outside of the asparagus acts like a tube to keep the contents inside. I have also used slices of potatoes (not green) and new small carrots cut lengthwise. I found cucumber and zuchini slices to be too moist and they trigger mold to grow in the container. 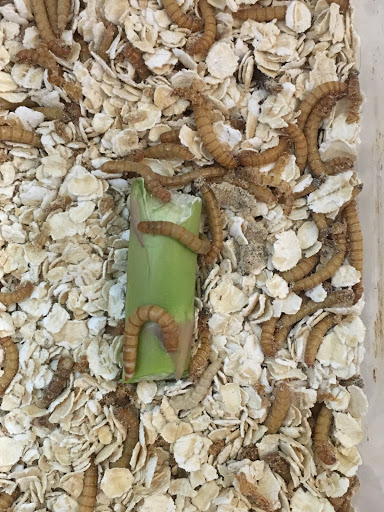 Preventing Canabalism
Beetles will eat both larvae and pupae so if you want top production, separate the beetles from the rest. A common approach is to sieve the beetles out and put them in a new culture container in which they lay their eggs. The old oatmeal is left in the original container and set aside for the eggs to hatch and tiny worms to grow. Pupae are also separated from the oatmeal.

Because I grow mealworms on a smaller scale (less than 500 worms), I sit a smaller open container on the oatmeal and place a piece of paper towel in it. One end hangs over the edge but does not touch the oatmeal. In this I place some developing pupae. When they hatch into beetles, they crawl over the edge and drop into the oatmeal. It makes it more difficult for them to crawl back in with the pupae to eat them. 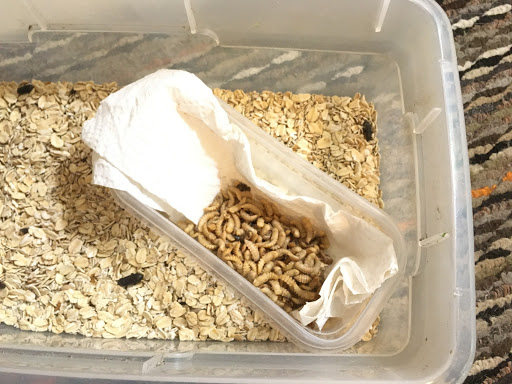 Here's a close up of larvae that have been separated. Can you see the lighter-colored ones that have newly transformed from worms? 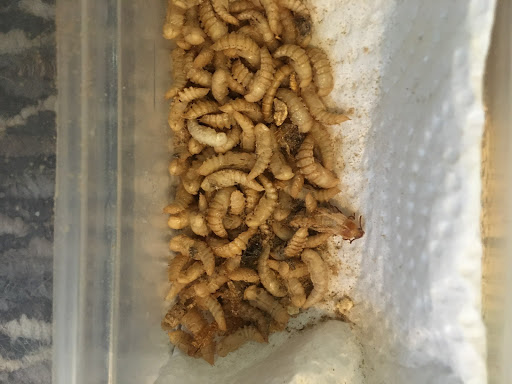 Temperature
They do take a while to grow in size. They grow more slowly at lower temperatures. I put mine under my fish tanks in the house at about 65F. Outside in the garage they grow more slowly in the fall and spring than being indoors but must be brought in in the winter as it gets too cold for them. During the summer they sit on the garage floor and do well between 50F-70F.

Harvesting
I hand pick the larger ones as I need them. The whiter worms have newly shed their skin and are preferred by many animals as they are softer. Once they have turned the darker yellow/brown, they are harder. The whiter newly transformed pupae are also softer and are easier to eat.

Popular posts from this blog

Culturing Daphnia for Tropical Fish and other Critters 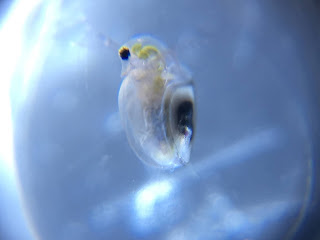 Daphnia can be a great food for may species of fish and small aquatic critters. They are relatively easy to culture if you know a few things about them. Their cultures tend to crash when the water temperatures go outside of a certain range and the water quality declines too far. They can be fun to culture on their own as a school project as well! In the photo above, the yellow is the digestive tract. The black is a forming egg. The second photo is the top view. The antennae they use to swim with can be seen. Tips 1 to 3: 1. For a steady supply, always have at least two cultures going, each placed in a different location. That way, if one culture crashes, you can rely on the other until the crashed one is back up and running. 2. Once you have an established culture, collect the tiny black triangular eggs that float on the surface before they sink. Dry them and save them in a container at room temperature. When immersed in water, they should hatch within 2 weeks. 3. You don't need ma
Read more 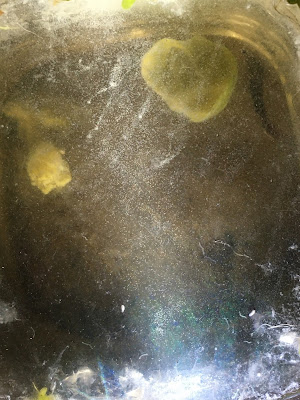 Infusoria are probably the best first food for really tiny fish fry that hatch from eggs. If you are planning to breed egg layers, they are a must! Infusoria can also be added to daphnia cultures as a source of food for them too. Start your cultures at least a week before you plan to breed to make sure you have the food ready for your fry. Most fry don't eat the first few days so that will give you about 10 days to get your infusoria cultures well-established.   What Are Infusoria? Remember back to grade 6 when you peeked through a microscope to see what lives in a drop of pond water? You probably saw microscopic paramecium, amoeba, green euglena, rotifers, etc. Well, those are what make up common infusoria. They are present everywhere in nature. Their eggs float around in the air and when they land on water with a suitable food source, they hatch, feed and multiply.  Various species of infusoria are about 25 to 300 micrometers in length. Tiny! Perfect to fit in the mouth of very s
Read more 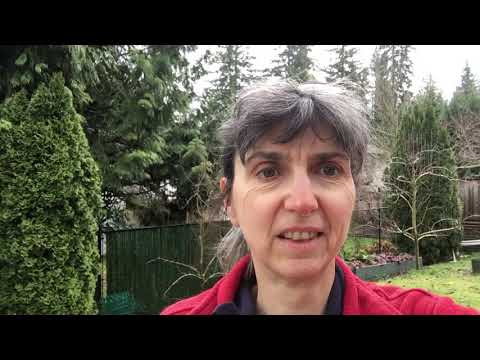 Learn how easy it is to attract and collect FREE fish food! Pot worms that can be found in your yard in the Pacific Northwest (BC, Washington & Oregon) make a great food for guppies, tetras, bettas and many other tropical and cold water fish! All you need is a few flat trays, some water, a turkey baster and small collection container. In the temperate rainforests of the Pacific Northwest they are available from November to April. I don’t know the latin name of these yet, but am searching for it.  I believe they are a type of Annelid (segmented) worm. Will share it here when I find it.
Read more